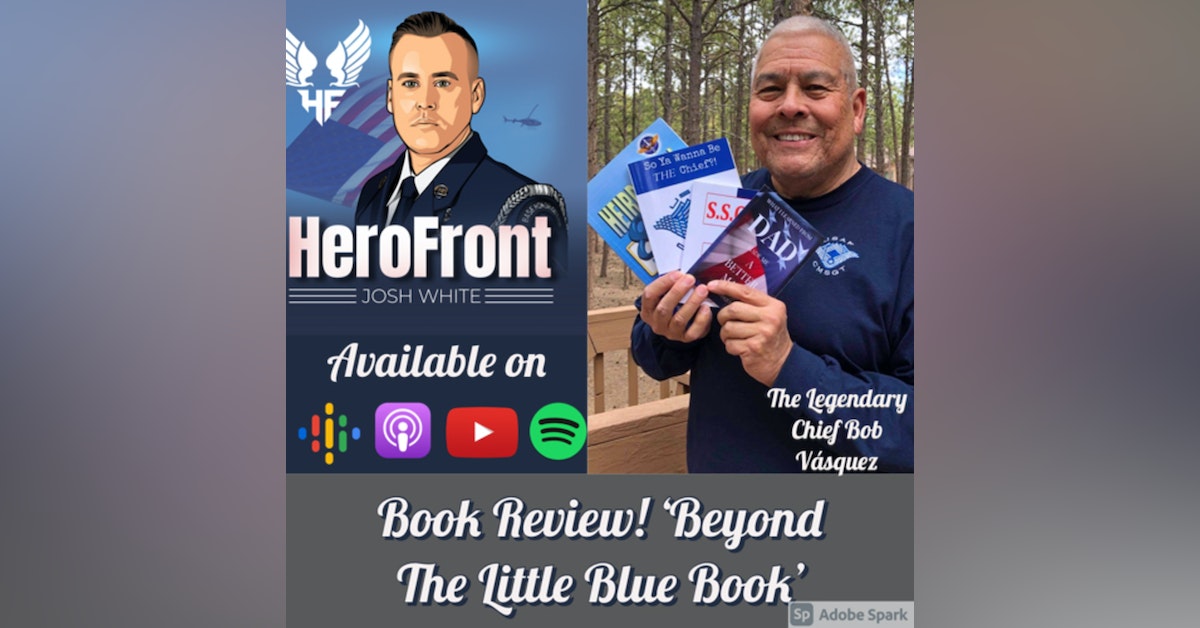 I talk with Chief Vasquez about his career, veteran mental health, and the release of his new book: "Beyond The Little Blue Book" All HeroFront podcast streaming platforms with full episodes found on the link below: https://linktr.ee/HeroFront Chief Master Sergeant (Retired) Bob Vásquez is currently a curriculum developer at the United States Air Force Academy. He has served as Course Co-Director for Officership 100, as well as Program Director for the Academy Center for Character and Leadership Development’s Freshman Character and Leadership Seminar. A wisdom seeker, author, musician, inspirational/motivational speaker, life coach, and mentor, Chief Vásquez’s highest accomplishments are raising two daughters; Tesa and Elyse, five granddaughters; Nieves, Alexia, McKinlee, Marissa, and Jojo, and one grandson; Bubby, as well as two sons-in-law, Nate and Jeremy, and growing closer to his lovely bride of more than 43 wonderful and fulfilling years, Debbie.  After graduating from Deming High School in Deming New Mexico and attending New Mexico State University, the Chief served in the United States Air Force for almost 31 years. In those thirty-one years, he served as a musician with Air Force Bands throughout the country, in the Philippines, and in Europe. He was the only bandsman to serve as Commandant of a Noncommissioned Officer Academy (at March Air Force Base California) and as the Senior Enlisted Advisor to the Commander of the 92 nd Air Refueling Wing at Fairchild Air Force Base near Spokane Washington. Just before retiring from the Air Force, he was the Deputy Director for the Family Support Center and the Superintendent for the Mission Support Group, both at Ramstein Air Base Germany. He is an adjunct instructor in the University of Colorado at Colorado Springs' Business School, which allows him to share his unique leadership experience with a very different audience, providing civilian students a different perspective than they would otherwise receive. He’s written and published six books; HEIRPOWER! Eight Basic Habits of Exceptionally Powerful Lieutenants!, So Ya Wanna Be THE Chief?!, S.S.G.T., A College Freshman’s Beyond Survival Guide, What I Learned from Dad Made Me a Better Man, and The Power of SUPERvision! Three more of his books will be published soon. Next to his faith and love of family, Chief Vásquez’ purpose is to share his extensive knowledge with as many people as he can. He calls it HEIRPOWER! He is known world-wide as the Ruggedly Handsome Chief!